Occasionally your bulb sockets are inaccessible or light sockets are too large to fit into the Lightkeeper Pro’s Socket Connector. If this occurs, use this rarely needed Alternate Method. 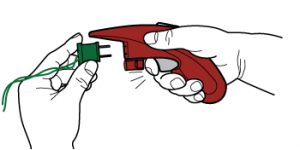 Alternate Step 1C: Now plug the set into the AC outlet. The previously defective section should now light. Replace any bulbs previously removed from the lit sections and replace all burned out bulbs. If lights did not illuminate, use the Voltage Detector in Step 2A.